So, this happened on Sunday: 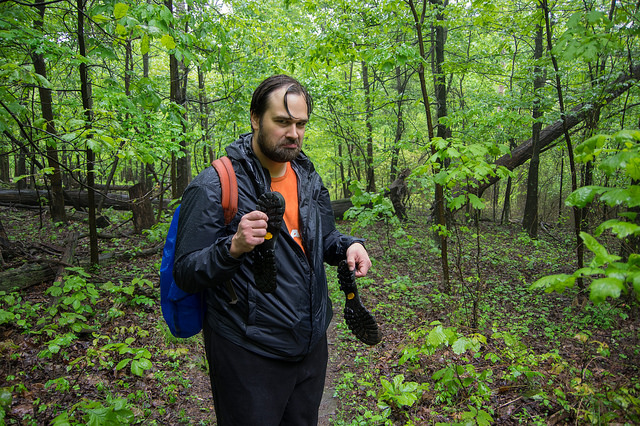 You know that feeling, when you go on a hike and you get to the top and you look out at an amazing view and realize your place in the universe?  Yeah, we didn’t quite get there.

We’re heading to Alaska in June, and we’ll be hiking a lot.  Graham has always really loved to hike, and I was an avid hiker in college, so when our friends let us know they were planning a hike on Sunday and asked if we’d like to join, we agreed without any hesitation.  We decided to head to Keys Gap on the Appalachian Trail, and had a good laugh at the possibility of hiking seven miles in the torrential rain.

Sunday dawned, gray and wet and windy.  It rained.  A lot.  We trudged our way up the trail anyway.  About ten minutes in, Graham discovered that one of his hiking poles was jammed.  Not the best start, but he managed, and overall it was actually quite peaceful in the woods – there was mist, it was quiet, the trail was empty.  We walked and chatted and took some good pictures.  And then the sole of Graham’s left boot peeled off.  Really peeled off, like a banana.  I was concerned, since the trail was wet and slippery, but Graham’s a trooper, and he wasn’t ready to throw in the towel.

Not five minutes later, about a mile in, sopping wet and beginning to wonder if this was actually a good idea after all, the sole of Graham’s right boot peeled off.  And, that was that.  I pretty much insisted that we turn around.  There’s never a good reason to risk an injury three weeks before a big trip.  Or any time, really.

So, we didn’t make it to the top of the mountain, and Graham’s trail name is officially “Sole-less.”  I suggested “Inspector Broken Gadget,” but it’s a little too long, I think.  The good news: since we didn’t actually spend all day on the trail, we snagged some great barbecue for lunch and enjoyed an afternoon sipping wine and chatting with our friends at the Aldie Peddler (one of my favorite places on Earth).  So it wasn’t all bad.  Sometimes, really, it’s better when the adventure doesn’t go as planned.

Graham got new boots and poles yesterday, but I think we’ll always remember this beautiful moment: 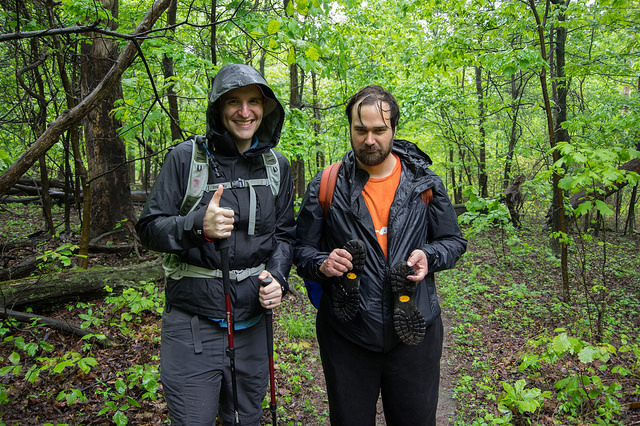