Avery Dye came home one snowy night in January to a dark, quiet house and a cold casserole dish on the kitchen counter with a note inside that read “Be back never, you sick bastard.” 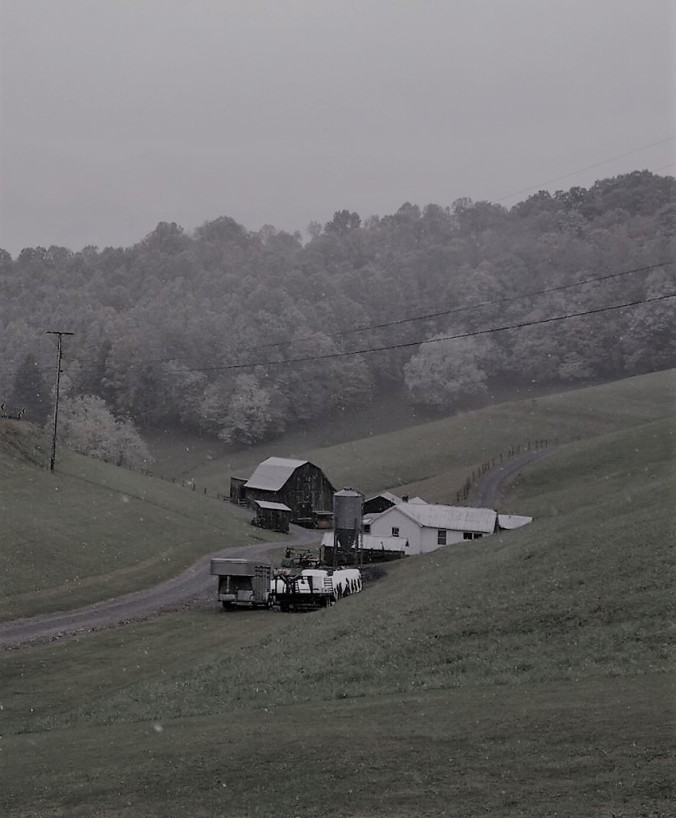 Elsewhere, about five hundred miles away and a little over six miles above his head, his wife Kelly sat in the middle seat of a mostly empty flight.  Kelly had planned every detail of her escape for months, right under Avery’s nose and without any guilt.  In the mornings, smudging a thick layer of cheap concealer over last night’s bruises.  At midday, between errands.  In the evenings, over the finely cracked, delicate porcelain of their civil dinner conversation.  This was the first thing that she’d really done just for herself in her entire twenty-nine years, and if it was selfish, she didn’t have the energy left to care.

When she thought of Avery, alone in the empty kitchen staring down a life without her as his domestic attendant, his living punching bag, his arm décor and bed warmer and everything he thought a “wife” should be, she smiled.  Let him live out his days alone, eating fast food roast beef sandwiches and drinking store-brand soda.  If he bought himself an actual punching bag and a body pillow, he might not even notice.

The plane bounced.  Kelly gripped the armrest.  She’d never flown before, had never traveled far beyond the little hollow between two mountains where she grew up, and each time the engine decelerated, or the wings began to angle, or the ping of the “fasten seat belts” sign sounded, her heart beat faster.  She looked down at her hand.  Her knuckles were white.  How many hours, she wondered, before I’m on the ground again?

“It won’t be long now,” said a soft, lightly-accented voice to her left.

“Did they announce it?”

“No, but I’ve flown this route many times before.”

Kelly took a moment to look at the woman sitting next to her.  She’d been so preoccupied before, she hadn’t noticed much of anything.  This woman, elegant in a light blue silk scarf with her dark hair neatly pinned in a bun at her neck, had clearly never lived in a white clapboard shack, had never cooked anything in a casserole dish, and had certainly never worn drug store makeup.

“Oh,” Kelly said, and then added, before she could help herself, “You don’t look like you’d have any reason to visit out this way.”  Though it occurred to her, after she said it, that she was the farthest from home she’d ever been.

The woman waved a thin hand in the air, “Everyone has reasons.  I go where I’m most needed.”

Kelly knew that aid workers of every variety often came to help in the mountains, working at free clinics and repairing rundown houses and such.

“And right now,” said the woman, as she rested a firm but gentle hand on Kelly’s own, “this is where I’m most needed.”

“What kind of work do you do?”  Kelly felt uncomfortable being touched, had not been touched with care in so long, but she tried to dismiss it.  This woman was someone worth impressing, the first one in Kelly’s new life.  This woman, she was certain, had seen the world, had been kissed on both cheeks by handsome Frenchmen in corner cafés, had probably ridden camels in Egypt and eaten real Chinese food in China.  Kelly suddenly felt small.  And why shouldn’t she, she chided herself.  Her world was the size of a high school education and a bad marriage.

“A little of many things,” answered the woman.  “None of them are truly work.”

“I guess it’s not really work if you love what you do.”

“Exactly,” said the woman, and winked a perfectly lined eye.  “Tell me about yourself,” she said.  “I love hearing someone’s story.”

A flight attendant came by just then, and the woman ordered a glass of champagne for them both.  Kelly had never tasted champagne.  She and Avery had toasted with 7 Up at their wedding.  She took the glass, sipped it, was surprised by its tart flavor.  So this was it, she thought, as her ears went warm.  This was her new life, the life she’d dreamed of and finally had the courage to pursue.  This was her breakout, her freedom, finally, come to fruition.  She allowed herself to feel little glamorous, for the first time, sitting beside this beautiful stranger on her way to a new adventure.

“There’s not much to tell,” Kelly replied, embarrassed all over again at her small life and her limited choices, all of them bad and many of them not really choices at all – nothing to do in her small town but visit the local library, no money for college or travel, no good jobs to make money.  At the beginning of her adult life, still a baby, really, at only eighteen, the stability of a marriage to a well-loved local boy, the safety of a roof over her head and food at her table, had seemed like the highest bar Kelly could reach.

Something about the rich caramel in her voice, the solid weight of her hand on Kelly’s, the conspiratorial twinkle in her eye, all convinced Kelly, though she didn’t know why exactly, to talk.  And once she got started, as the woman cooed affirmations and tenderly held her hand, Kelly found that she couldn’t stop.  She laid out all of her broken pieces – her sorrows, her regrets, her shame, her dreams – and began to feel lighter with every word.

“Darling,” said the woman, “how much you’ve been through, and you can’t be more than thirty.  But look,” and she motioned out of the window, “we’re here now.”

“We are!”  Kelly hadn’t noticed the plane descending, through layers of clouds and above crystal blue water and white sand.  “I’ve talked your ear off!  I’m so sorry.”

“No, on the contrary, I enjoyed your story.  I’ll keep it close, just like the others I’ve collected.  And I hope you find your burden lighter.”

Kelly thought for a moment.  There had been a burden, hadn’t there?  She’d been worried about something, hadn’t she, frightened even, when she stepped onto this plane?  Only she wasn’t sure now.  Perhaps it was the champagne, she thought.  To be polite, she replied, “I’m sure I will,” and, “thank you.”

“Thank you,” said the woman, and stood to begin a slow walk down the aisle of the plane, humming lightly as she went.

Kelly stood up, as well, and grabbed her overhead bag.  She wandered off the plane and into the terminal, daydreaming about dewy air and warm saltwater.

She thought of nights spent listening to the sound of waves lapping on the shore, and of being alone in a pillowy bed with a good book.

She felt a nagging tug, though, somewhere in the back of her mind, that an empty bed would be terribly lonely, and that the beach would be sticky and too hot, and she wondered if she shouldn’t move to the mountains.  A small town in the mountains, perhaps, where she would meet a rugged, handsome man, and live a simple, charmed life.

The woman watched Kelly go, though Kelly would hardly have noticed.  Her job done, and the fine, wispy strand of story and memory tucked firmly into her palm, the woman turned and walked to Gate A6.  She tucked Kelly’s story into a handkerchief, glowing faintly and still humming a sad, hollow tune, and placed it in her pocket.  She sat down beside a young lady in black leggings and an oversize sweater, with her arm in a sling and a backpack resting on her thighs.

“It won’t be long now,” the woman said.  She ran a hand with sparkling, black nails through her hair, now worn in loose, blonde curls streaked with bright blue.

“Our flight boards in fifteen minutes.  Tell me, are you traveling for business or pleasure?”

The young lady thought for a moment, and said, “Both.  Or neither?  I’m not so sure.”  A tear slid down one cheek, and she adjusted her sling at her shoulder.

“Well, why don’t you tell me all about it?  Maybe I can help you decide.”  The woman smiled, and watched as the young lady’s expression went slack, and then sharp again.

“I don’t know where to start,” she said, but she did start, and she laid out her troubles and her dreams, and the woman listened.

The woman always went where she was needed, and she was always needed.  She never had a moment to feel bored or lonely, because some poor soul was always wishing for an escape, a new start free from pain or fear.  It was a delicate and a daunting job, collecting these stories, weaving them into an even thread that could be pulled out clean and quick.  How fragile, the woman thought, were stories and memories, and how easy they were, once the thread was done, to take forever, and how little they were missed.

**This is the first in a series of stories I’m planning to post.  I’ll write more about it soon.**

For many people, and for me, most years, January is the time for new beginnings.  My January started with an ending.

This is a picture of my sweet grandmother as a teenager.  I like this one, because she’s smiling, and she always hated pictures of herself and never really smiled in them.  I would give just about anything in the world to see her smile again.

So, where do I go from here?  Lots of people have asked this question, I’m sure, and I know I’m lucky to be asking it in my thirties, and not any sooner.  But you never really have enough time with the people you love.

Writing now, suffering through my second horrible upper respiratory infection of the season, pondering loss, I’m quite glad to say goodbye to January 2020.  See you again never, you shameless bully.