I can’t remember what first sparked my interest in Beowulf.  I was in high school.  I was hungry for stories and itching to immerse myself in subjects that challenged me.  It could have been that the Lord of the Rings trilogy was going strong in theaters, stoking the collective imagination of a generation ready for magic and epic battles between good and evil (having been primed by Harry Potter and his many adventures).  It could have been a new phase in my lifelong interest in historical esoterica.  I’m not really sure, and it doesn’t really matter, because I’ve loved Beowulf ever since, and I’m not about to stop now.

My first encounter with Beowulf was shepherded by Seamus Heaney, and I’ve often called his work the “gateway translation.”  This is the iteration that gets you into the story.  Heaney’s meticulous attention to the cadence of the verse; his talent for turning arcane sensibilities into relatable one-liners; and his easy dedication to presenting Beowulf – the original man, myth, and legend – as not only an adventurous, brave soul in search of a noble calling higher than himself (and seeking a little glory along the way, because why not?), but a flawed human being just like all the rest of us, all serve to draw new readers into this old story.

I’ve read Heaney’s translation now more than any other, and I’m about to do it again.

Over breakfast last week, I read a magazine article called “Beowulf is Back” by James Parker.  The crux of the article – that this ancient epic just won’t go away – got me thinking, not only about Beowulf and why I love it, but about why people love epics.  Why do we obsess over heroes?  Why do we frame our world in terms of good and evil?  Why do we love a battle scene?  Why do we still look to a text older than our language to find answers about ourselves today?  And what does all of that say about us?

Really, I’m not sure.  I could fill pages with my assumptions, but I don’t really want to do that, and I don’t think anyone really wants to read it.  Instead, I’m going to look at Beowulf with fresh eyes, and see what I learn.

Over the next four weeks, I’m going to reread Seamus Heaney’s translation of Beowulf, and then I’m going to read, for the first time, three graphic novelizations of the story that James Parker mentioned in his article.

I’m looking at this challenge in two ways.  First, it’ll be fun – I love Beowulf, and I’ll have four weeks’ worth of Beowulf, and that is exciting.  Second, it’ll satisfy my curiosity.  What can these different interpretations of the same story tell me about why we just won’t let Beowulf fade into obscurity?

If I haven’t yet convinced you that Beowulf is worth your time, or if you’re not into old stuff, or if, for reasons I will never understand, you don’t like to read, I’m sure you’re asking yourself why I want to do this.  The simple answer is, because I am curious.  I want answers.  I want answers to lots of questions, actually, but I’ll settle for the Beowulf-related ones for now.  I believe that we should always be thinking, we should always be asking questions, and we should always, always, always be curious.  A curious mind is a powerful one.  People who ask questions make discoveries, and sometimes those discoveries change the world.  Sometimes, they just scratch the intellectual itch that people like me can never quite shake.  But, and at any rate, no one ever amounted to anything who didn’t first ask questions.

And so, off I go, into Heorot once more, to see what I can learn with thirty-year-old eyes and a brain that often forgets where I left my car keys.

And it all begins with “Hwæt…” 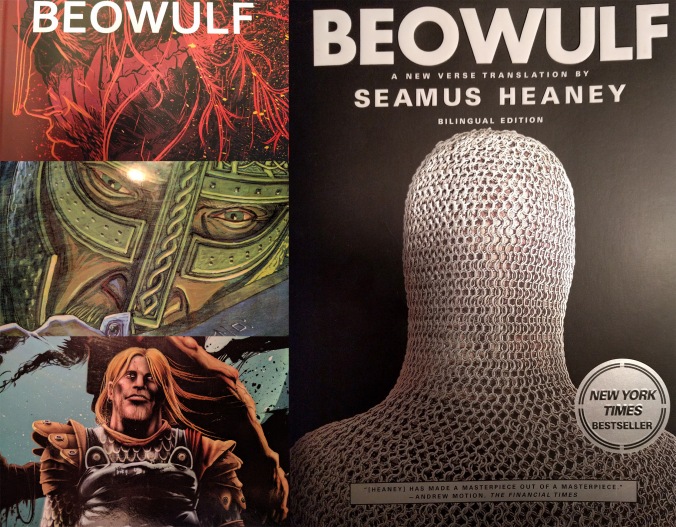 2 thoughts on “Beowulf, Epics, and Why Curiosity Matters”